Most of us would have to agree ‘things just aren’t the way they used to be’. I’ve heard my dad and some of the other older generation (I’m 35) who have hunted mule deer for 40 or more years talk about the numbers of deer and quality of bucks observed and harvested in days gone past. While there always seems to be a good buck harvested here and there throughout the west today, the general consensus seems to be the same; our mule deer are in trouble. Some of us have turned to hunting elk and are excited about the increasing elk numbers, while others have been riding out the storm in hopes of the deer someday returning to their numbers of the past. Still others, those die hard mule deer hunters won’t even hunt unless they can draw some coveted tag where the numbers may not be what they once were but at least the quality is still there.

So what really has happened to our mule deer populations? Where have all the mule deer gone? If you asked this question to 20 different wildlife biologist you would most likely get a different answer from each of them. It amazes me as a biologist the response I get from this question; everyone has his or her own opinion and it’s hard to get a real good answer. The truth is mule deer and mule deer populations are complex and static and to narrow their decline down to one specific problem would be ludicrous. However, in talking with my peers I’ve come up with several real problems facing our mule deer right now. While I’m sure there are plenty more out there I would like to share a few of them with you. I do this only to help educate and in hopes of getting you involved as sportsman and nature lovers in helping us solve these problems in hopes of bringing mule deer back to suitable populations west wide. 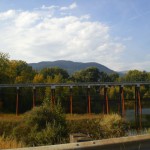