There is nothing like hunting in the Bighorns around Ten Sleep, Wyoming. My friends and I had a very good year hunting in Ten Sleep and Kaycee, Wyoming. It all started out on October 18th. My friends Parker and Josh Lyman of Ten Sleep started our year off with a bang on the first day. It was already 9 days deep into the Area 48 hunting season for elk. Due to the fact that I am now a teacher in Laramie, WY and Parker is attending the University there as well we had to wait a couple of days to drive the 5 hours back to the town of 300 where we grew up our entire lives. Parker and Joshs family own a ranch in Ten Sleep and have some of the best hunting in this region. We decided to go to an area on their place that we call Split Rock. After a 3-mile hike we positioned our selves on a cliff overlooking a small canyon. Parker is an amazing hunter and guide and quickly spotted a small calf bedded down under a tree.

After that incredible spot it seemed like the trees came alive. We started spotting elk everywhere. They were coming out from the other side of the hill which had previously hindered our ability to see them. There was a nice bull out in front so Parker decided to try calling him. Parker does not use any device to call but instead he has learned how to manipulate his voice to sound exactly like an elk. On the third call the bull became interested and to our surprise so did the rest of the herd. As we were sitting on this cliff the elk started to move up this finger right below us. When the bull got to within 80 yards I rested my .270 Winchester on the rock in front of me. The 180 grain Winchester bullet sailed true and the bull went down. After this I was treated to one of the coolest sights I have ever seen. Because of our location and the terrain, the elk did not know where the shot came from and they all started running up the finger towards us and ran right below us within 10 yards. We all made a rough count as they came running by us and we counted around 400 head.

The bull that I put down was one of the biggest that came by us and I credit this to the fact that it was the 9th day of the season and the herd bull was already probably taken because we grow them a lot bigger up there than the nice one I was able to get. Maybe next year I will get one. As we got to my bull I could see that he was a nice 6X6. He had 2 broken tips, one on his right G4 and one on his left G5, but was a good looking bull. As I got ready to gut my elk Parker was watching the herd file over a hill and noticed a nice buck about 380 yards away from us slowly making its way up a small ridge. Since this was going to be my last day to hunt in Ten Sleep before returning to work and I wanted to fill my deer tag so I could guide some of my other friends, I decided to take a shot. The only problem was that I did not have a rest and a 380 yard shot standing is not a high percentage shot. I decided to use the antlers on my elk as a rest and a great rest it made. As Josh held the antlers up for me, I was able to get my deer with a little help from my elk. After a long drag out we finally got my elk and deer back to my house to start the skinning and processing. To my surprise this was only the beginning of a heck of a hunting season. Due to the angle that Tommy had to shot with he had to switch and shot with his left hand.

Since I had already shot my animals I now wanted to get some of my friends there animals. My family owns a ranch in Kaycee, Wyoming so I told them I would take them up there and get them a good deer. On our place you can shoot both mule and whitetails so it is a very nice hunting area. In our hunting party was myself, my father, brother-in-law Josh and his wife Dana, Tommy Jackson, and Tom Hudson. We woke to a wet, snow soaked morning. We decided to position ourselves at the top of rims that run along the meandering creek that weaves in and out of the bottom of our ranch.

After glassing for a while we saw a couple of whitetail bucks heading out over the rims about 600 yards from us. For some reason they were on the move. We would not see them for the rest of the day. We decided to go look down into the canyon that runs along the west side of our place. As soon as we got there we started looking and were able to jump a nice mule deer from its bed in the rims. Without missing a beat Josh got a quick rest and let a bullet fly. The buck was just running over the top of a little rise when Josh shot. We were not quite sure at first if he had hit him but Tommy, Dana and I were pretty sure that he had. Sure enough when we got down there the buck was laying just over the hill. After a very long drag back up the rims by Josh, Dana (man she is a tough lady, must come from having to deal with Brook, Madison, and Tyler all day long), and I with a little help from Toms 4-wheeler we had our first deer of the day. Later on that day Tom shot the biggest mule deer doe that I had ever seen. Ha Ha just joking Tom. You got it for the meat huh:) After that we decided to give it up for the day because the weather was getting pretty bad. The next weekend Tommy and I were back up there but this time we brought our friend Ryan Wildenborg. That morning we positioned ourselves on the rock ledge again and again those same bucks went up through the rims too far and too fast in front of us. Tommy took a couple of shots but the deer never stopped running and you know those Wyoming whitetail. This no doubtable frustrated us but we kept on. Later in the day Ryan and Tommy set up on a little ledge overlooking the creek and an irrigation ditch which had a well used deer trail running along side of it. As I pushed the trees and brush between the creek and the ditch they waited at the end. For some reason the hunting Gods were on our side that day and a very nice whitetail ran out of the brush below Tommy. Due to the angle that Tommy had to shot with he had to switch and shot with his left hand. With one shot from Tommys 257 Roberts the deer ran across the creek where Tommy finished him off. This deer was one of the best I have seen on our place. He is very symmetrical and has a huge body. Unfortunately we were unable to get Ryan a deer that day but like any other true hunter we knew we would be back the next weekend.

Once again Ryan and I were back in the truck for the 3 hour drive to Kaycee the very next weekend. The morning was overcast and windy. Due to the previous weeks adventures we knew we had to be up on those rims way before daylight. As we hiked up the hills of Kaycee, Wyoming (thanks Garth for that saying) in the dark we knew something good was going to happen. I positioned myself on the east end of the rims and Ryan sat up on the highest point at the west end. As soon as daylight hit I started seeing deer everywhere, the only problem was that they were all mule deer and the mule deer season had closed the weekend before. However, the whitetail season was still open for one more day. As I scoped the bottom I picked up some whitetails moving through the bottom. I decided to go get Ryan so we could make a stalk on these deer. As I started approaching Ryan he had his gun up and was looking at something clear down in the bottom. I was very curious at why he was not using his nice binoculars to scope but kind of let it go. All of the sudden I heard Ryan shot. Now from where Ryan was shooting he would have had to shoot all the way into the bottom which was around 400 yards down hill a long ways (see the pictures below for the picture of where Ryan shot to where the deer was).

The week before he had tried to shot a doe from this distance and had barely missed with his 300 short mag. so I knew he could do it, but I never thought he would try it on a buck and risk scaring him. When I got up to him I saw a huge whitetail buck running along the creek with a couple of does. Ryan shot again and the buck stumbled a little bit and ran into the bushes along the creek. We watched for a little while and never saw him come out. After about 3 minutes of spotting I found the buck standing by a big bush. Looking at him you could tell that he had been hit. We waited for him to lie down and than Ryan put the stock on him. Ryan got to within about 150 yards and the rest was history. I taped the entire thing and it came out awesome. While we were walking to his deer we spooked up a couple more bucks that were a little bit smaller than Ryans but unfortunately I didnt have a tag left but can you imagine what they will look like next year. Overall it was a great year and due to the great success and abundance of deer Tommy and I have decided to start up a guiding service in the next year so be on the lookout for us and for Parker Lymans services as well.

looking for one of the local ranches that might or will sell trespass for deer hunting…mulies and white tails.

i have hunted the open BLM areas for years. i want to go into some private land or river bottoms. 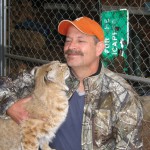