It was my 3rd year of hunting, and I was 16 years old. I had shot a doe my first year, a nice 5×5 bull the next year, but what I was determined to get, was a nice mule deer. I live in Hailey Idaho, which is right next to Sun Valley. The elk hunting can be pretty good if you draw a tag or bow hunt, but it is a general deer unit, and a lot of people hunt it. Big bucks are extremely rare. Since nobody in my family hunts, my next-door neighbor, Jim, takes me out. I took October 10, 2007, the opener off of school, and went into one of Jims favorite canyons. Unfortunately, we were one of 8 groups of hunters up there. As soon as it got light, shots rang out through the entire canyon. We were sitting on a ridge, waiting for the hunters ahead of us to move, when I noticed something moving on the finger ridge directly in front of us. It was just a little forky, and I had told Jim earlier that I was going to either shoot a nice buck, or none at all. Then I noticed that he had a friend. Big brother was standing behind a tree, and when he walked out, I jacked a round in the chamber. I was so excited to see this nice four point, I didn’t take time to find a rest, and it was about a 450-500 yard shot. I tried to get closer, but the buck spotted me, and took off. He came around on a well-traveled trail, right where I though he would. BOOM, BOOM, BOOM, I shot eight times, but was shaking so badly, I could hardly even keep him in my scope. I am glad I didn’t wound him (yes I went over and checked thoroughly for blood). I was so frustrated when he finally made it to the timber, I thought that was the only nice buck I would find this season, but I wasn’t even about to give up. The next two days I went by myself once, and with a friend, John, after school. On the second day, Friday, John and I got into a nice three point, and I let him take it; I wanted something bigger. As we were dragging it out, a guy named Craig who takes me bow hunting, and took me the year before to get my elk, called me, and told me that his friend had seen a dandy buck up where we had gotten into some elk that September. I had my doubts, but decided to wake up at 4:00 in the morning, and go for it anyways.

I was rudely awakened by my annoying alarm, and wondered why it was going off so early. I remembered I was going deer hunting, and really wanted to turn off the alarm, and go back to bed. However, I knew that there was no way I was going to get a big buck with that kind of attitude. I got ready, and ran over to Jim’s house as he was making breakfast. He had no idea where we were going, and had never hunted the area, so he was a little skeptical.

When we finally parked the truck, and started hiking, it was about 6:00am, and pitch black out. As we fought our way through the trees, the undergrowth started to clear. It wasn’t that bad of a hike compared to some of the others I have been on. It started to get light, and I knew we had to get on the ridge above us to check out the canyon on the other side. I left Jim behind, and hurried to the top of the ridge. Right when I got there, three different bulls started going off right below me, along with a bunch of cows. I started glassing the other side of the canyon, hoping to spot the white rump of a mule deer. I knew there was a bench in the very back of the canyon, where things leveled off and there was good feeding and bedding areas. I glassed it pretty hard, but didn’t see anything. Jim finally made it to the ridge, and spotted some cows, calves, and spikes way up high on the opposite side of the canyon, so I decided to move up the ridge a ways, closer to that bench. I dropped down so that I wouldn’t be sky lined, and worked my way along the ridge. I didn’t know where Jim was, so I came back up to the top, and glassed the bench again. There he was. My adrenaline spiked as I saw that there was a big buck bedded underneath a tree on the bench. I had no idea where Jim was, so I just rested my rifle on a big rock. I had no idea how many yards it was, so I put him in my scope, and just guessed. I put the crosshairs about 6 inches to a foot above the back of his front shoulder, took a deep breath, and squeezed the trigger. My Savage .270 spoke 3 times, each bullet finding their mark. My first shot hit him in the heart, and he stood up from his bed. My second shot hit him in his heart, and he was about to go down. My third shot hit him in the throat, and he collapsed, and slid down into his bed again. “He’s a nice one!” I hear Jim yell from a little ways down the ridge. “Look, look, there’s another one coming out into the open!” I yell back. “Oh yeah! Oh its just a doe.” He says. “No! Its another good buck, I’m taking him!” He yells. He shot and, unfortunately missed him four times. It was another awesome buck. I raced over to where mine was, and started whooping and hollering, as I feasted my eyes on my first buck. I couldn’t have been happier.

I enjoy hunting high country deer because of the spectacular scenery, and the fact that not too many people are willing to do it. I would rather have taken this buck way up here, than taken a 30 incher down in the sagebrush. Its so much more rewarding, knowing that I really put in the effort to hike all the way up, and earn this spectacular deer. I shot him at 9:30 in the morning, and didn’t get back to the truck until 10:30 at night. It was one long, gnarly pack out. I drug him about half way down whole, by myself, while Jim followed the other deer’s tracks to look for blood, and possibly see him and get another shot. When Jim met up with me, we cut it in half. Jim carried the two back quarters on a pole across his shoulders, while I drug the rest down on my own. He is bigger than any of the bucks any of my friends have killed, and it’s my first one. The Big Guy in the Sky was on my side this season, and I am extremely grateful for it. I have just eaten a nice deer tenderloin dinner, and am working on a beautiful European mount. I am so proud of this buck; I can’t wait to show it off to everyone at school, and display him where I can see him before I go to bed every night. 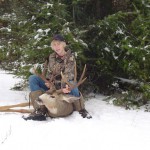