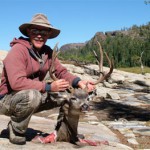 by Grant Nelson We have taken many deer on private land near our homes in the Sierra foothills, but this was the first time either of us had even shot at big game on public land in California. What great results two days, one gun, two shots, two nice animals! Big game hunters dream about these… Read more » 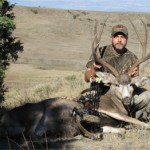 by Garth Henderson It was early in the archery season, and the first time I went to hunt this particular area. I drove up there in the dark, and walked through the wide draw, to the top of a ridge to wait for the sun to rise. The wind was terrible, 40-50 mph., and the temperature… Read more » 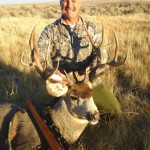 by Stacey Dodson My 2005 late season Southern Idaho buck hunt started off with much anticipation and maybe a little too much expectation. That all changed the day before the season opened. On November 9th, my 13-year-old son Ryan and I were loaded up and headed out. Thanks to parent teacher conferences, he was going to… Read more » 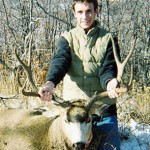 by Brandon Talbot Opening Opening morning of the general rifle hunt in northern Utah found my Dad, Mark, my two brothers, Brett and Bryan, and I in our favorite spot as soon as it was light enough to hunt. This is a long anticipated moment for our family, as we love to be outdoors with each… Read more » 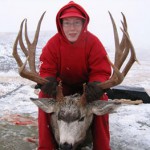 By Cheryl Partridge As the 2005 Mule deer season got closer my friend Barry Englot, my dad Don Partridge and I were getting more and more excited. We once again were drawn to hunt in the “Big Muddy” area, south of Bengough, Saskatchewan. Our first Mule Deer hunt was in the same area 3 years previous… Read more » 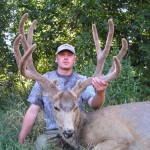 by Brandon Wicks I took this 185 inch P & Y buck in Utah in the 2005 Archery season. I saw him hanging out with four other bucks a day before the hunt started. The five bucks were hanging out in a bachelor heard and feeding from the thick oak down into the sagebrush flats at… Read more » 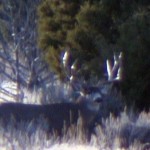