My 2005 season started like many other Washington hunters. Apply for special permits, and if you don’t draw a tag, you get to hunt your regular or late season. This year I was blessed with 1of 15 tags that 5500 other hunters apply for. The permit I drew is for the Desert unit, # 290. Most people know Washington as the Evergreen state, but Eastern Washington has alot of desert area intermixed with irrigated agricultural area.Hunters can acess wildlife areas, and most of those are walk in only. Unit 290 is not very large, but with limited permits and great food and water sources, these deer have the opportunity to grow big.

The area I was in is made up of rolling sage brush and sand dunes, and near water sources there were Russian olive trees and thick brush. Opening morning was Nov. 1st, and a buddy took the day off work to check out the area with me. We saw deer all day, some smaller sucks, and a nice 3×4 right before dark. I’m a blacktail hunter, and it was hard not to shoot a deer that was way bigger than any buck I’ve seen on the western side of the state where I usually hunt.For the next 4 days, I hunted alone, with the same results, does and small bucks.The desert is a beautiful place to hunt, and I put in alot of miles hiking , taking my time and really enjoying my opportnity to hunt here. By day 4, I had some awesome quarter sized blisters on the back of my heels, so I only hunted the morning, and headed to town to find something to put on them. The rest of the afternoon I relaxed and rested in camp.

The next day I was ready to go. The day before, I had found some brush back behind some large sand dunes that had been really torn up by a buck, so that’s where I was at first light. I jumped a few deer in the morning, and as I watched them I looked to my left and about 200 yards away, my deer was heading for the trees with some does and a few smaller bucks. I waited a few minutes and then went to the spot where they had been. I spotted a few deer way out in the sage, but couldn’t see the buck anywhere. I watched for a while and then made a bigloop back behind where I seen the deer earlier. At one point, I hit my boot tracks, and there were big deer tracks on my trail! I guessed that deer had split from the others and circled back behind me. By now it was mid day, and I decided to trail along because the deer was heading toward where I had spotted him in the morning. I saw him again, alone, and this time he did bust out into the sage flat. There’s no way I can cover ground like he can, so I got up on a low sand dune and glassed for a while. I knew he had headedout to my right, so I decided to drop back and try to catch him before he got back behind me.I don’t know if it was my plan or just dumb luck, but sure enough, I caught him in a low spot between two big sand dunes. This wasthe 3rd time I had seen this buck today, and I had decided earlier I would take him if I could.I took a quick offhand shot as he ran and I saw him swerve, so I was sure I had hit him. he was headed back out into the sage, and I ran between the sand dunes until I had a good view. I got my shooting sticks set up and waited for him to stop running. He stopped about 300 yards out, and was walking in circles, so I knew my 1st shot had hit him. He was standing in some tall sage brush, broadside, with his shoulder and neck clear. I had about 30 minutes before dark and I wasabout 3 miles from my camp, so I took the shot. I heard that sound we all love, a solid whack when a bullet hits, and I walked out to him. My bullet had hit him right under the chin and he was mine. I walked up on him and was amazed at the size of his body. I think he was 250+ live wieght. I know this was not the biggest buck in that unit,but it was stll a greatDIYhunt and I’mreally grateful to be able to take this deer. I had an interesting time quartering and trying to cape him in the dark, and I packed out the front shoulders and head that night. When I finally got to camp, another hunter took some pics for me and congratulated me on my deer. He took a nice 2 point the next day. The next morning I packed the rest of my deer out and headed home. As I drove home, I kept thanking the one who made this possible, my Heavenly Father. Back home, my Taxidermist had to use a small elk form for the shoulder mount, his mule deer form wasn’t big enough! Thanks for letting me share my story.

Very nice Buck. My dad drew a late bow tag and was looking for guys who had success out there. Any tips? 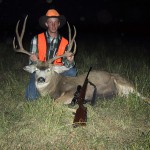