There has been much confusion about the benefits hunting. Although well intentioned, many of the perspectives of NON hunters overlook the fact that generally accepted wildlife management practices, which include hunting, have science as their basis. Also unnoticed are the benefits that hunting provides in helping to maintain a balanced ecosystem. I believe there is value for all of us in understanding huntings uses in the modern era.

It is an unpleasant fact that every living organism must nourish itself by consuming another living organism in order to survive. Mother Nature has designed a survival matrix of predator and prey relationships for every species on our planet. We see this when the rabbit takes the life of a plant for sustenance, the hawk takes the life of the rabbit, and the plant is nourished by micro fauna that decompose the fallen hawk.

History has documented that when there is an over abundance of animals in an ecosystem much of the plant and animal life will die-off in mass numbers until equilibrium is restored. For example, too many deer will over-browse plant life in a habitat, which leaves less food available for other animals that depend on plants for their survival. The wildlife populations are then forced to leave the habitat in search of food, and if no sustainable habitat is available (such as in urban areas or habitats that are already heavily populated) they eventually die from malnutrition or disease. Mother Nature may be cruel in her ways but she is certainly effective.

In many states there is visible proof that wildlife populations are out of balance. Deer are hit by cars and are forced into our yards in search of food. Geese become so plentiful that they foul our water supplies and living areas. Bears become so abundant that they encroach on communities making it unsafe for both man and beast. To control this problem towns resort to hiring professionals to destroy deer, or call the DEP to have geese gassed during their molt when they are flightless and vulnerable, or turn to trained personnel to kill bears that encroach on urban settings.

More than a century ago conservationists, biologists, and wildlife professionals began to transform hunting, which was becoming less important for acquiring food with the advent of the institutionalized slaughter of animals and their distribution to food markets, into a tool for maintaining equilibrium in habitats. To this day biologists and wildlife professionals scientifically determine the optimal number of each game animal in an ecosystem and then establish quotas or bag limits on populations that exceed the limits. Hunters may only hunt the species of animals that are assigned by wildlife professionals and must abide by the established bag limits, therefore culling only the surplus animals.

Since humans are part of the predator prey equation we also depend on other living organisms for our survival. Hunting of surplus animal populations is also of benefit because it satisfies the original purpose of hunting sustenance. If a hunter doesnt hunt he or she will ultimately go to the food market and buy beef, poultry, fowl, pork, or some other form of life that has been slaughtered for market. The tradeoff is that when a huntsman or huntswoman hunts a surplus animal he or she is not only helping to maintain balance in the ecosystem but is also choosing to be nourished by wildlife rather than by institutionally slaughtered animals.

It should be noted that hunters provide 75% of federal and state funding used by the agencies, scientists and other personnel that are responsible for the management of our countrys wildlife. This is done through purchases of licenses, permits, wildlife stamps, and by a special tax on select hunting products. Additionally, a large percentage of wildlife and habitat preservation is funded by the private donations of hunters since most are members of conservation organizations.

Although humans may not be able to change the unforgiving design of the food web, or be able to fully eliminate Mother Natures extreme measures for keeping our ecosystem in balance, hunting has proven to be a purposeful, efficient, and effective facilitator of our worlds natural order. It minimizes the devastation that is caused by over abundant animal populations while at the same time fulfilling mans requirement for sustenance. 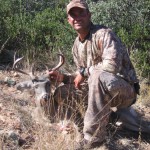