Rocky Mountain mule deer are one of the most adaptable and widespread ungulates in North America. Annually, mule deer provide more than three million hunters and incalculable pleasures for millions of wildlife viewers. Unfortunately, mule deer populations in many parts of their historical range are declining. The effects of these declines go beyond deer, the hunter, and wildlife viewer. They also impact revenues received by wildlife agencies for habitat projects. Simply put, these declines are occurring because adult deer in the breeding population die and are not being replaced.

All experts agree that having an adequate number of fawns maturing to breeding adults is critical to sustaining mule deer herds. We know that weather,habitat loss, disease, predation, and even highways take their toll on both fawns and adults. We also know that several of these factors are clearly tied to overall nutrition. However, one factor that has not been discussed as part of this equation is the potential effects that increased human disturbance may have on mule deer populations, particularly immediately before, during, and after the rut.

The fact of the matter is, mule deer live in places where people like to hang out. The number of visitors to and the amount of encroachment in mule deer habitat continues to escalate as human populations grow. Along with these increased visitation rates, many western states have continued to conduct general season buck-only hunts while extending the length of the hunting seasons to accommodate early and late season archery and muzzleloader hunters. States also have experimented with either sex, antlerless, and antler-restriction hunts in an attempt to maintain hunter opportunity, increase mule deer densities, and improve herd age structure and composition. In addition, increasing elk populations and the associated hunting opportunities are placing more and more hunters in mule deer country.

Although harvesting mule deer has actually been shown to have a positive effect on fawn recruitment, under this diverse harvest management matrix and increased hunter access, long-term mule deer population trends and associated hunting opportunities in the west have continued to decline. Last, but not least, hunters and other outdoor enthusiasts (including hikers, backpackers, and weekend campers) now have access to the more remote areas of mule deer ranges because of improved road systems and 4-wheel drive vehicles.

What has this got to do with fawn survival? hunts. Usually at this time of the year, fawns should be well on their way toward putting on fat for the winter. Chances are, many of these spotted fawns will not survive winter. These observations may provide early evidence that something may be affecting the timing and duration of the mule deer breeding season. If the breeding season is altered, this can change when fawns are born (parturition) as well as the length of the fawning period.

The advantages of being born early and with a buddy

In temperate environments successful recruitment may ultimately hinge on optimally timed reproduction. In these environments ungulate young are born in a few days or weeks. Few would argue that reproduction, timed to take advantage of favorable habitat conditions for raising offspring, would enhance recruitment. Maximizing body mass and offspring maturity will increase the probability of young surviving their initial winter. Adults also benefit from properly timed reproduction in the form of energy savings and future reproductive success.

Some researchers have suggested that mule deer and other ungulates, in response to seasonal variation in resources (weather, cover and food availability), may actually alter their breeding seasons. They argue that birth synchrony in ungulates is an adaptation to climatic uncertainty and results from cues that can be used to predict future conditions. However, while seasonal resources variation can affect offspring survival, it is unlikely that anything so variable could regulate the timing of the breeding season Synchronous breeding and parturition is well documented in undisturbed ungulate populations where mature males functioned as the primary breeders. Some researchers have long argued that synchronous births in wild ungulates, including mule deer, may ultimately be regulated by chemical cues called pheromones. These pheromones are only produced by mature mule deer bucks during the rut. They can induce and synchronize estrus in groups of does.

If increased human disturbance either prevents mature bucks from locating females, or if insufficient numbers of mature breeding males are present, the timing of the breeding and following fawning could be delayed. Immature males may be unsuccessful in their attempts to breed or incapable of covering all receptive females during the initial estuarial cycle. The existence of this phenomenon would facilitate energy efficient breeding, ensuring that fawns are born the following spring when habitat conditions are best. Although this phenomenon has been documented in domestic livestock and other species to include white-tailed deer, its role regulating mule deer reproduction has not been documented.

The timing of the rut – implications for doe and fawn survival

The breeding season for most Rocky Mountain mule deer begins in late October with fawning occurring as early as late May and peaking in June. Mule deer does have a gestation period of about 210 days. Arguably, the timing of mule deer reproduction evolved to maximize both doe and fawn survival.

Does who are bred in late October would fawn when spring weather and forage conditions were optimal. Forage plants at this time would be at their maximum protein content and digestibility. The availability of high protein forage would allow the doe to meet the energy demands of lactation. Until fawns are weaned, does will have little opportunity to build the energy reserves needed for the following rut and winter.

Fawns also require high protein diets to achieve maximize growth. Thus, the earlier a fawn is born and begins nursing, the more likely it is going to be able to take advantage of the high protein content available in spring forages. Fawns that receive adequate nutrition during juvenile growth periods are more likely to put on the body mass needed to survive winter.

If the timing of contemporary harvest management strategies or increased recreational access are disrupting the biological mechanisms regulating mule deer reproduction, these factors may inadvertently be contributing to reported declines in deer abundance and quality, thereby impacting future hunter opportunity. Also, if public access or harvest management strategies increase spatial and temporal separation in mule deer during the rut, they also could be contributing to poor recruitment. 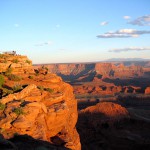