Some thoughts on the delicated predator prey relationship

Its basic biology, a predator that kills and eats its prey impacts that animal and may to some extent impact the population of an area. The big question is how much? If an animal’s death has no effect on the population such that it is replaced by another and numbers stay the same or increase, its compensatory mortality. If its death has an impact on the population such that it continues to decrease, its additive mortality. Volumes of research has been conducted which attempts to address this question. Because there is rarely a clear definitive answer, one of two things usually surfaces. Those who oppose the underlying reasoning attack the study. Conversely, those who support its conclusions beat the drum even louder. Simply stated, if the research shows coyotes impact mule deer, people who like coyotes have problems with the results, but to the sportsmen who have claimed that coyotes are killing the deer, the research shows exactly what they have been saying. Therefore, research on predators is often a double-edged sword and results are often inconclusive.

In my short career with predators I think I have come full circle, especially when it comes to mule deer. Back when I was a teenager and knew it all, “the only good predator was a dead one”. I spent hours hunting predators, especially coyotes. I did this simply because I thought it would create more ‘muleys’. I went to college and found out I really didn’t know it all. Here I learned about the relationships between predators and prey. I was taught predators don’t always impact our game populations, after all they only take the sick and weak. Predators can’t and won’t eat themselves out of house and home. As I learned more about predation and actually digested the research/data I started making observations and applying those observations with what I was learning. I believe what we are seeing more of here in the west, especially with our deer herds, is that predators can and are having an impact on our deer in many areas. There are many theories, I will tell you what I think. First, there has been big changes in how we implement our predator management strategies, second, has to do with elk and the predator pit hypothesis.

Predator Management; Now and Then

Overall, deer populations are down since their heydays in the 50’s and 60’s. Pretty much everything that can be blamed for this decline have been visited and re-visited. No doubt the primary limiting factor is habitat, or should I say the lack of habitat. If we had the habitat quality and quantity we once had we likely wouldn’t be having this discussion. That being said, I think we can and should take a closer look at the predator factor.

Back in the heyday of the mule deer, we (sportsman, state agencies, federal agencies) killed predators at will. Coyotes, bobcats, and even lions were trapped, poisoned and many western states carried bounties on certain predators. Most of this was done in the name of livestock but it arguably kept predators under control. While these activities still continue, fewer people pursue predators. Until recently, the Feds were killing fewer coyotes because of environmental restrictions (but mainly because we have fewer sheep ranchers) and a coyote bounty only happens in selected counties in one state that I know. Less than twenty years ago many states allowed unlimited harvest of bears and lions. It was a rarity to see a bear let alone a lion twenty years ago, now it seems a rarity if I don’t see a bear and/or a lion on my various outings each year. Lions are intensely managed in most western states today. Most manage them as a big game species and have quotas or limited opportunity units where the sex, age, and area of harvest are closely monitored. I even question if the way we manage, hunt, and harvest lions are allowing them to increase. Every biologist knows you control population numbers through the harvest of females, not the males. By continually selecting against the big mature toms, which everyone wants to throw on their wall, are we are allowing the lion population to increase by taking away their own population regulators? Certainly, one could make a valid argument that our predator management philosophies and practices has had a direct impact on our deer populations over time while allowing the predators to increase.

Now let’s talk elk and their role in predator pit hypothesis. Elk populations are escalating and it is having a direct and indirect effect on our declining deer populations. Elk are loud, social, vocal animals, larger, stronger, and more resilient than deer. They eat and can survive on a wider range of food sources, browse higher, tolerate more extremes in drought and bad winters. and seem to be thriving everywhere. Conversely, mule deer are more sensitive to extremes in weather, more selective to available food sources, and tend to be shy, solitary, reclusive animals. Should there be any question that elk will out compete and displace deer given time? I look back at the areas where I once would see a plethora of ‘muleys’ and big mature bucks, and now see a preponderance of elk instead of deer, something just isn’t right.

So elk are everywhere. What does this mean for the predator? Simple answer really, there are more groceries on the table. Normally there is an intricate balance between predator and prey. However, when there is a secondary prey source to choose from at the store, it is unlikely a predator will starve to death even if it’s primary prey decreases. If McDonald’s goes out of business or burns down, you’re still going to survive because there is a Wendy’s across the street. I think this is what we are seeing with our deer and elk herds. Deer numbers are down and are fewer and farther between but elk are plentiful. This shift makes it possible for predator numbers to remain stable or even increase when deer numbers continue to decline.

This alteration in the predator prey relations is called ‘the predator pit hypothesis’. It states, when a primary prey (in this case mule deer) are reduced in numbers by a natural or even unnatural event (over harvest, winter kill, drought, loss of habitat, etc.), a predator species can increase or remain stable and continue to suppress their primary prey if they have a secondary prey (in this case elk) which they can switch to. How can we have increasing populations of coyotes, lions, bears, and elk and expect our deer to remain stable? The system is out of balance and it doesn’t favor mule deer. Predator management is an important aspect of mule deer management and steps need to be taken to keep predation in line with current deer populations.

So what’s to be done?

This is really a complex question and we have to be realistic. With all the animal rights groups and the public opinion out there we just can’t declare an all out war on predators as was done in the past. Besides, I think most of us do like to have at least a few predators around. We can’t just go out and eliminate all of the elk either. So what do we do? Obviously something needs to be done to jump start mule deer populations and putting pressure on predators is an important tool towards this end. As I stated earlier habitat is the answer but all the predator control in the world won’t help if we don’t have the habitat to support our deer herds. The problem is the political and legal nightmare involved to undertake any habitat improvements. Our federal land management agencies are either too afraid of lawsuits or don’t want to bother to improve rangelands. With some recent positive events, I am starting to believe the tides are beginning to turn. With the many recent fires in the west, federal land management agencies have been mandated to implement a fuel loads reduction program. Many are looking at using traditional means, such as chaining, to implement this program. Additionally, there is a big push to save the sage grouse and sage grouse habitat. Fortunately for us ‘muley’ lovers, grouse and deer are sympatric species.

What can we do to help? I think we need to work hard and close with our state and federal land management agencies to support and encourage large scale land treatments that favor mule deer. We need to work with our state game management agencies to ensure these land management changes are not just going to benefit the elk and if that means we need to put more pressure on the elk herds and predators in affected areas for a few years, then that is what we need to be willing to bend just a little to save the mule deer.
About the author; Todd A. Black is a wildlife biologist and environmental consultant and part owner of CWMS. He enjoys hunting, photography, birding, and spending time with his family. Originally from Blanding, Todd currently lives in Hyrum Utah. 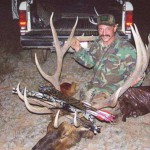