Have you ever hit a deer while driving some highway or interstate? I would wager that most of us have or at least know of someone who has. I know I have, only once though. I was on my way home from school, it was a dark rainy night and the roads were wet and the street lights and car lights were creating a terrible glare, I could hardly see 50 yards ahead of me. I was even going below the posted speed which for me is a miracle. All of a sudden there was a big thud; at first I didn’t know what it was I thought I had hit someone rather than a deer. It scared me to death. I remember seeing the neck and head of the deer as it seemed to stay motionless between my bumper and header panel for an eternity but finally slid off. I stopped, turned around and went back to see if by chance it made it. It didn’t, it lay there in the road deader than dead. As I dragged it off the side of the road I remember feeling sick to my stomach for the loss and at the same time mad at the deer for being in the wrong place at the wrong time and for the $1000.00 dollar damage that was sure to follow. The other day as I driving home from a cow elk hunt in southeastern Utah to my home in Hyrum, I was sickened by the number of dead deer along the highway. I try and keep notes of the deer I see dead on the road, what highway they are on and mile post. I do this for continued research and for my own records more than anything. What I thought was interesting on this trip was the number of bucks, there were 5 that I saw between Price and Provo (a 70 mile drive). It’s staggering when you think of the deer we loose each year on our highways. I travel a bunch throughout Utah and I have counted over a 100 a year several different occasions in my yearly travels. I remember a friend who had a permit to pick up road kill deer back in the mid to late 80’s telling me he averaged over 200 per year along a 20 mile stretch of two different highways in southeastern Utah and maxed out one year at over 500 deer. That’s a bunch of deer and wasted resources. I recently spoke with a biologist from California who speculates that they loose just as many deer to vehicle collisions as they take in their annual harvest, staggering! There’s a bunch of deer being lost on our highways each year certainly these road kills can be a significant part of our declining deer herds and in many places are a major cause of decline to local populations.

In Utah and other western states, deer-vehicle collisions (DVCs) occur most frequently in spring and fall when deer migrate to and from/or occupy winter ranges at the lower elevations throughout the state. Researchers at Utah State University estimate that nearly 10,000 DVCs occur annually on Utah roads even though state traffic accident records report, only 2,200/year. DVCs have increased significantly in the United States since 1980. Recent studies estimate that 1.5 million DVCs occur annually. More than 90% of deer involved in vehicle collisions are killed instantly or die later from their injuries. Nationally, DVCs result in approximately 29,000 human injuries and over 200 human fatalities annually. Estimated damage to vehicles exceeds $1.1 billion, with the average repair bill is over $1,600 per vehicle. Likely these figures will likely increase as vehicles become more costly to repair. DVCs are not just costly accidents or the loss of a life; they are often lost hunting opportunities, loss of recruitment, and lost of genetic diversity as well.

As our population continues increases we chew up more and more natural resources and areas where mule deer live. New highways and roads are being built, expanded, and continually upgraded into deer habitat. These byways fragment the habitat and make migration and dispersal of mule deer difficult in not impossible. We build new subdivisions further and further up the mountain right into critical mule deer winter ranges. These new subdivisions create new roads and create more and more DVCs each year. Several studies have shown that some localized mule deer populations can be adversely impacted by DVCs and road construction. All this and little is being done to mitigate and deal with the losses. Why not! What can we do? What is it going to take to reduce or eliminate DVCs or is it even possible. Obviously the answer is simple right, SLOW DOWN! In reality there are several things that we can do. Most important is getting involved and being educated as to the DVC issues in your back yard. Start keeping records date/highway/mile post/sex of any DVCs you come across. Turn this data into your local transportation agency and wildlife agency along with a nice letter asking what you can do to help. Data is a powerful tool when it comes to making your case.

Just about every thing that can be done to reduce DVCs has been tried and tested. Some work while others don’t. There seems to be a direct correlation with cost of the project/method and its effectiveness to reduce collisions. In many European countries large overpasses (100’s of meters/yards wide) that are made to look like part of the natural landscape and environment. These have been very effective at moving deer and other wildlife over and across highways without any human deer conflicts. In other areas, high fences along certain highways are used funnel deer to cross a desired location/crossing. These are often used in conjunction with flashing signs and reduced speed signs. These appear to be somewhat effective but the deer are still on the highway being hit and in many cases more deer collide with vehicles then occurred prior to the fencing. As part of a 1993 migration study on the Paunsaguant/Kiabab herd, researchers used large flashing signs that were put up only during the migration period. The theory was that the larger the sign and flashers the more visible it would be to drivers. They also theorized that by putting the signs up only during migration, drivers would be less likely to become habituated to the signs. The signs served their purpose, speeds were reduced in the core migration area and DVCs were reduced. These signs are still being used today and if used as designed and put up and taken down before and after migration takes place, they are very effective. DVCs. Concerned citizens and Mule Deer Foundation members of Wells Nevada worked on a DVC area near Pequop Summit (Hwy 80) to erect large warning signs with flashing lights similar to those used east of Kanab Utah. In Utah a local scouting troop painted plywood-warning signs that were fastened to metal posts. These signs didn’t meet code and Utah’s Department of Transportation removed them. However, many people saw the benefit of these signs and with support from the Utah Department of Transportation and Utah State University, standardized signs were produced and installed.

Addressing and fixing any DVC problems and issues is not just a one man job, it takes effort, patience, persistence and time to fix these problems. Get involved and active and let’s start working to eliminate DVC problems in our back yards. 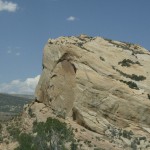