The hoofed animal has rather chunky body, large ears, slender legs, and short tail. Its general color varies from light tan to reddish brown to white. It stands 35 to 41 inches high at the shoulders and weighs between 100 and 140 pounds. With horns that grow from 12 to 15 inches long. 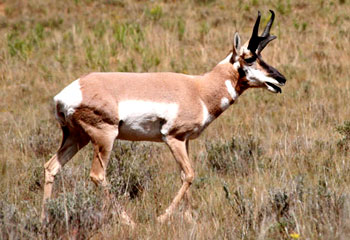 The Pronghorn is sometimes called the American Antelope. It is said to be the fastest large mammal of North America. With sprinting capabilities of up to 40 miles per hour. The pronghorn however is not a true antelope, as it is often referred to as. It has remarkably keen sight which allows the animals to detect its predators, which are coyotes and wolves. They Pronghorns are a very social creatures. In the winter they band together in large herds.

The breeding season for the pronghorns begins in september and ends in october. Each buck with gather 3 to 4 does. Some will have as many as 8.

The Pronghorn live in open grasslands and range from Northern Mexico, to Western Iowa almost to the Pacific Coast. A Pronghorns vegetation is primarily sagebrush, al-triplex, rabbit brush, and other shrubs. 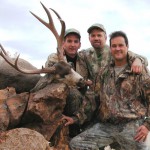