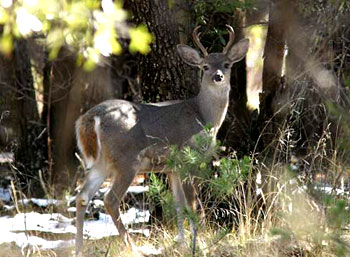 The Coues Deer (Odocoileus virginianus couesi) is a sub-species of the Whitetail Deer. It’s also one of the smallest deer in America. Coues deer stand around 28-32 inches tall at the shoulder and measure about 56 inches from head to tail. A large field-dressed buck will rarely exceed 80-90 lbs. (some can exceed 100 pounds) and usually weighs about 65 lbs.

The Coues deer varies in color from a grayish coat in winter to a more reddish-brown color in the summer. Fawns are born with numerous white spots on their coat. Those spots generally disappear after about 2 months. Coues deer have the classic white circles around its muzzle and eyes seen on other subspecies of whitetail. However, Coues deer don’t have such a prominent white throat patch as do whitetail deer. The tail of the Coues deer is generally brown with a border of white on the topside and completely white on the underside. This is in contrast to a mule deer which has white on the topside of the tail. Tail color can vary geographically. The topside of a Coues tail can be grayish, reddish brown, or black.

The breeding season for the Coues deer is about 6-8 weeks later than northern or eastern whitetail. Breeding generally occurs from December to February with the peak usually in January. Females are receptive to breeding for only 2-3 days. Does that become pregnant will give birth to fawn(s) about 180-200 days later. Fawning dates are usually mid to early August. Does can have singles or twins, triplets are rare or don’t occur at all.

Primarily browsers of shrubs, but they prefer forbs (A broad-leaved herb other than a grass, especially one growing in a field, prairie, or meadow) and those grow more commonly in open areas such as a grassy meadows or grassland. 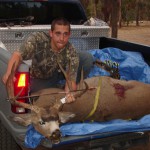