My 2005 late season Southern Idaho buck hunt started off with much anticipation and maybe a little too much expectation. That all changed the day before the season opened. On November 9th, my 13-year-old son Ryan and I were loaded up and headed out. Thanks to parent teacher conferences, he was going to be able to go along on the first four days of this hunt without having to miss any school. We had borrowed a camping trailer from a friend and were looking forward to camping in comfort for a change, instead of hoping the air mattress stays pumped up throughout the night, and the tent doesnt leak. About thirty miles east of Boise on I-84, the transmission on my 87 GMC Jimmy decided this wasn’t as much fun for him and quit right on the spot. I had to get towed back to Boise to a transmission shop for a rebuild. That effectively killed the first part of my long anticipated deer hunt. Tow back to Boise-$250, Transmission rebuild-$1450, loss of hunting time PRICELESS.

Time to go to plan B.

A few more steps forward and…there they go bouncing out of the small crease that concealed them.

Fortunately I had planned to be able to hunt 13 of this units 15 days if need be. So the following Wednesday I was back on the road again, fingers crossed, and headed to my hunt. I was down to eight days of hunting time, (if I counted Thanksgiving day) still plenty of time to tag a buck! I got to my campsite and set up without incident. Things are looking up!

Thanks to hurricane Katrina and the thieving oil companies, I didn’t get to scout like I wanted to. I did have a beautiful plateau picked out, with brush to the rim and lots of little pockets and gullies to hide a big buck. I was there long before dawn, coyotes serenading the new day. Binoculars and spotting scope straining into the most likely hiding places. Nothing, not even a doe. I kept moving from vantage point to vantage point, same result. Great looking country but no deer. It went like that for two days before I spotted my first deer, a cute little 2×3. I noted his approximate position for the last day, (just in case). It went like this for 4 days, one little buck, no doe’s.

Then the wheel bearings on the left front wheel had enough and stranded me five miles from camp, and 120 miles from home. A kind cowboy named Cameron gave me a ride to the next town. Four hours later, my wife and kids came and got me and I figured my hunt was over.

The next day an awesome friend drove me back to the disabled truck where I attempted to make the repairs, but didn’t have all the parts I needed. We spotted a couple of small bucks in the distance but couldn’t get close enough for a shot.

I was pretty discouraged by this point, but my friend wouldn’t give up on this hunt and brought me back the day before Thanksgiving. We decided to hunt the morning.

I would fix the truck in the afternoon and if there was any time left, hunt the evening. We saw one small buck in the morning but I wasn’t interested. I got the truck road worthy and we decided to give the ridge one more look over before heading home. We got to the top and started driving the two track through the sage. Jim spotted a doe and another, then a buck, “THE BUCK”. He jumped up and started after the doe’s. I jumped out of the truck but couldn’t get a clear shot at him because of the tall sage. We watched them bound over the ridge then we followed. It was about 300 yards to the edge of the ridge where the deer had disappeared and when we got there they were gone. Jim told me to continue looking for the deer, he was going to go back to the truck to drive around and meet me at the bottom. The hill I was on was grassy but the grass gave way to an endless sage that swallowed anything that didn’t want to be seen. There were a couple of folds in the landscape that might hold my buck so I continued forward. Slowly scanning every few moments with my binoculars hoping to see him one more time. A few more steps forward and…there they go bouncing out of the small crease that concealed them. I crouch down to a kneeling position, hoping that he would stop to take a look at his pursuer. He did BOOMMy shot was good and he went down.

He is by far the best buck I have ever shot, and the second best buck I have ever seen in the wild. He is a 6×8 with a 7″ kicker on his right side and 3 extra points on his left. His outside spread is 28 1/2″. He is not a monster by the standards set by some, but he is an awesome buck to me. He is at the taxidermy shop even as I type this. I’ve been looking for this dude for 12 years and he is going to look awesome on my wall. Sorry for the long story but it was a long time a comin.

Love the buck!! Was this in Unit 41? I actually have a tag for unit 41 this year. I have lived in Idaho my entire life. I have put in for unit 41 for most of my life (funny thing is, I am 41 and I finally drew unit 41) My father had this hunt 2 years ago and got a 5×5 that was 291/2 wide. I think your buck is very respectable, and hope I can get one simular to yours. Congrats!!

I too drew for this controlled hunt tag in unit 41-1. I never hunted there before, but was told there is some big bucks there.A buddy of mine shot a nice 6×6 there in 2008.He hooked me up on places to go.I am going to start scouting next month and am way excited. This is my 2nd time I drew for a controlled hunt tag.My first one was Manns creek and shot a respectable 4×5.I love the later hunts.I love the deer story and hope to get similar results.Maybe I will have my own story to tell.

I am headed back to unit 41 tomorrow with my dad- yes, I drew a beloved tag from a lot of guys I have spoke with. This is only my second hunt (ever), I drew a moose tag a few years ago and was successful with that. This is definitely different country than what I hunted before…I did see about 8 does, few elk, and lots of antelope when I was ther Nov 1-4 but we ended our trip early because we were not seeing any buck. Your buck is amazing and I would be very honored to tag something like that! I hunted close to the Nevada border- wherever I saw Aspen. Any tips would be appreciated. 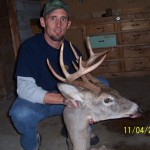