It was early in the archery season, and the first time I went to hunt this particular area. I drove up there in the dark, and walked through the wide draw, to the top of a ridge to wait for the sun to rise.

The wind was terrible, 40-50 mph., and the temperature was in the upper 40s. There was not any deer in sight, so I decided to head over the next ridge. I spotted a herd about the same time they spotted me. There were six bucks in all, and they all appeared to be 5x5s. One of them was extremely tall, and one was extremely wide. All six of them left me in the dust, and I decided to let them be for the day.

When the arrow arrived, the cedars exploded with movement.

The weather is much more favorable for archery hunting the next day with light winds and blue sky. I approached the situation a little different this time and arrived in the daylight so I would not spook them. I started spotting with the binos two miles out. I spotted all six a mile to the East, and they did not see me come in. They fed there way over a saddle to the East.

I grabbed a pack and threw in a spotting scope, range finder, knife, camera, and with my Black Max II, I was on my way. It was a little cooler this morning (low 30s), but I knew it would warm up quickly. I headed down into one of the main draws out of sight, and headed to where I had last seen them. I peaked over the ridge, and they were two ridges away. When they disappeared, I did too. They bedded down on a Western slope, and I was putting a plan together. All of their eyes locked onto something that was out of my sight, but it was enough for them to get up and single file into a different draw. From where I was, I could see the top, bottom, and far side of this little finger draw, and they did not come out. I staid there for another half hour, and decided to go back the truck and shed some cloths.

I left my pack, jacket, and anything else to blame a bad shot on and headed in after the heard. I peaked over the ridge where they crossed over, and there was a group of cedars in the bottom of the draw. I glassed those trees but could not pick out one single deer part. I went to the top of the draw and glassed from there..still nothing. I went to the bottom of the draw and still could not pick one out.

If I were a patient person I would be in a tree stand, but Im not, so I decided to stalk the batch of cedars from the center, where they went in. I shot the far side of the draw where I could imagine them stopping and looking back and set my single pin sight at 45 yards. The ground was soft, but the vegetation was dry. Every step I would stop and slowly scan through the trees.

I was less than 20 yards from the edge of the cedars when I picked out the form of one of the bucks. It was still bedded, but the front legs were extended as if it froze while getting up. I could see the base of the antlers, and could tell it was one of the two bigger bucks, and was pretty sure it was the tall one. My arrow was already knocked, and I did not think it would stay there and watch me re adjust my sight, so I drew and held low.

When the arrow arrived, the cedars exploded with movement. They all crashed through the other side, and stopped where I hoped that they would, and the tall buck buckled, and rolled back down.

Indeed he was the tall one. 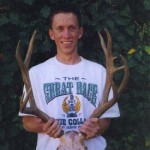