It had already been a bad year and opening day hadn’t even arrived. July brought news of cancer in my three year old son and just a few weeks before opening morning, my grandfather passed away. So with a solemn heart and a full mind, I decided to take to the desert and sage in mid October like I have for the past 13 years.

The day before the opener, I traveled back to eastern Washington from Seattle where my boy was receiving chemotherapy. Although I “knew” my 30-06 was still zeroed in, I went out to a field just to make sure. Turned out to be a good thing. I was 4 inches high and to the left at 100 yards. My gun had been sighted in for 200 yards. And of course, I ran out of light before I could get it zeroed again. Thankfully my uncle had a Winchester .270 he put on loan to me.

So with a gun I had never fired before, I left for the sage and winter wheat opening morning. I arrived about an hour before light. I sat and drank a cup of coffee in my truck and wondered what else could go wrong this year. Turned out I didn’t have to wonder to long. After starting into a little draw that bordered a green field, I headed toward a small pocket of tall brush that had held a few nice bucks in the past. As I approached the six-foot sage, I caught a flicker of movement in the brush—a bright orange movement! My opening morning spot had been busted by another hunter.

I hunted the rest of the day, covering more ground than I care to mention. I saw several deer, but only one legal buck with a spread of around 16 inches. Not what I hoping for with all the ground I had covered. The next day I awoke to the sound of heavy rain and wind beating the windows. I layed in bed and wondered if it was even worth getting up. But, some how I drug my sore legs out of bed and headed for the hills again. I caught a break at first light with the wind and the rain stopping. So, out the door of my Chev I went. I hunted until around noon, seeing fewer deer than the day before. Most of the ones I did see were about a half mile away bouncing through the sage so fast I couldn’t even get glasses on them before they disappeared.

The next day in almost the same spot while Dad, Chris and myself were pushing for Doug he saw what he thought to be the double drop tine. It was just a little far out for a shot, while he was figuring out a way to get closer another buck which was bigger than mine came running up saw him and took off, he got a shot off but unfortunately missed.

While heading home for lunch, my uncle called and said my aunt had downed a nice 3 point. They had been hunting on horse and with her filling her tag, it left an empty saddle. I decided to try my luck on horseback that afternoon and give my ailing knees a rest.

Since my luck had been so good already, it didn’t surprise me that as soon as we were in the saddle, it started to poor rain. We made it about a mile into the hunt and decided to turn back. We were wet clear to the bone and it showed no signs of letting up. After checking out another spot on the way back to the horse trailer, we decided to call it a day. We jumped into the truck and headed for home.

On a last second whim, we decided to check a small draw next to some grapes and corn. We had spotted a fine buck there about 3 weeks before the season. When I got out of the truck, I pulled up my bino’s to take a look. The only thing I saw was fog inside the glasses. Great! So, I threw them out and headed for the draw with my uncle. He went to a high point while I ran parallel to it. Not 20 yards into it, the buck exploded out of the sage and bolted. I pulled down and fired just as he cleared the brush. THWWAP! The buck stumbled. THWWAP! My uncle fired a half second behind me.

In the midst of the shooting, somehow the clouds had opened up into a magnificent sunset. With the sky set ablaze in a fall fire, we snapped as many pictures as we could before running out of light. The muley measured out at just under 26 inches wide and 22 inches tall. With a small kicker and an extra main beam, the buck turned out to be a 5×6. Not to mention a solid 275 pounds on the hoof. What a hunt. I guess even if it is bad luck, you have to run out of it sometime!

I’m loving the sunset in the background! Nice photo. 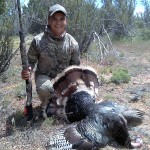