Photo by © Roy Grace aka: BOHNTR 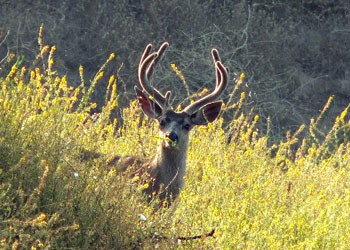 They are called Black-tailed deer because the bottom two thirds of the tail is black. Up higher, where the tail is attached, the fur is brown and under the tail is whitish. The general body color is reddish to greying-brown (with black hairs interspersed in winter) and the underside of belly, chin, neck patch are white. The brownish color camouflages the deer in the forest and field edges where it lives.

A female is called a doe and weighs 70 to 140 lbs. A male is called a buck and weighs
120-250 lbs. Weight of individuals varies depending on the availability of food. Larger
animals generally live in in areas with more food, or less competition for food. Large males may measure up to 90 cm (36 inches) at shoulder.

Males grow branching tyned antlers (similar to Mule deer antlers) which are lost in March and re-grown in the summer. A mature male will have 5 points on each side.

Does have their first young at 2 years of age during years of plentiful food. Twins are born when the Bracken Ferns have grown tall enough to hide the fawns underneath (Early May). Fawns each weigh 3 to 6 lbs and are speckled to camouflage under the Bracken Ferns.

The fawns do not have a smell and lie still under ferns to hide when mom away feeding (most of the day). This helps it to escape notice of predators.

Black-tailed deer are most active at dusk and dawn, but also feed at night. They are inactive during the heat of the day and prefer to bed down (rest) in thickets (dense group of trees) near streams with a good food source.

They use their large rotating ears to let them know of predators nearby and bound away like kangaroos on long legs at the first sign of danger. During the rut, males are wary but will sometimes stay in a hiding spot and let the predator walk by within a few feet.

Winter starvation is a main cause of death in Black-tail Deer, parasitic infestations is second. Their predators include domestic dogs, coyotes (pairs or more go after adults, singles go after fawns), cougars, and human hunters.