My uncle, Randy, called me and told me he was going hunting with his son, Randall, the next morning but they were leaving at 5:30. I talked my mom into letting me miss school and my dad into getting up and taking me to Paragonah at 5:00 the next morning.

When I got to my uncle’s house he had his four-wheeler loaded on the trailer and was ready to go. We were going to meet my cousin at the Bear Valley turn off. When we met up with my cousin we put the trailer on his truck and he had borrowed a four-wheeler. We decided to go where we had seen a huge buck on a late cow elk hunt the year before. We got to the dirt road and went up to a canyon and sat there for a while because it was still dark. I fell asleep and woke up when we were driving again. We didn’t see many deer, maybe 5 does as we were driving to the top.

When we got to the top my uncle and I walked down a trail and were glassing it. We didn’t see anything so we walked back to the truck to decide what to do. My cousin was glassing from the truck and when we got there he asked if we saw the deer feeding on an old burnt hillside. We hadn’t seen them and they started going into the trees. My cousin said that the last two were good bucks and started unloading four-wheelers. My cousin started up the hill and after getting our lunch and my gun, me and my uncle followed. We followed a real rocky trail up the hill and through a saddle to where we had spotted the deer. We got off the four-wheelers and I followed my cousin down where we seen them last. My uncle stayed on top and I heard him whistle. I looked up and he was pointing across a small draw. I told my cousin and started making my way to where I could see what he was pointing at. My uncle had my binoculars so I didn’t get any real good looks at the deer when they were on the hillside. My cousin told me to take the 4 point in the middle of the group. I couldn’t see him but I seen a huge buck at the bottom of the group.

He said to shoot at it and he would shoot at the 4 point on three. One, Two, Three…His gun shoots, mine just goes pop. I put another cap on, pop. He had missed the 4 point and my uncle was by us now telling him to shoot the bottom buck, he was huge. I was below them a little bit trying to figure out what my gun’s problem was and never hunting with a muzzleloader before wasn’t helping me. It wasn’t even my gun; it was my Uncle Jay’s. So I just started putting caps on and hoping it would light the powder. After about the 5th or 6th cap I gave up and watched one of the biggest deer of my life.

My cousin made him jump once and then the deer started getting spooked. All except the big one. He just calmly started walking, or I guess waddling, up the hill. As soon as he hit the skyline we saw how big he really was. We estimated him well over 30 inches and about 5 or 6 points on each side with a cheater on his right horn. As soon as I saw how big he was I started trying caps again. None of which ignited my powder. My cousin chased them, I took my gun back to the four-wheeler, it wasn’t any use to me, and started to look for blood. I didn’t find any. I found my cousin and my uncle later.

Later, my cousin poured some powder in the nipple hole and put the nipple back on. I put a cap on and it fired. I was pretty mad that I hadn’t got a shot at him but it was worth it to see a deer like that. So no giant deer was taken this trip, but hopefully there will be another chance at him. 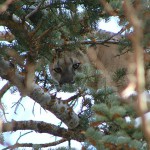