I have been asked by clients, friends, and other hunters what I think is the best type of camo pattern available out there on the market today. What camo I buy and why. Now I will admit that I have my preference for a particular camo patter but in the interest in advertising and marketing I’m not going to tell you what it is, those of you that really want to know can visit our web page to find out. I’m not even going to talk about what is or isn’t the best camo out there but what I am going to do is talk about ungulates (deer, sheep, elk, moose goat) in general and what and how they see.

It’s funny to watch how the camo industry has exploded in the past 20 years. This explosion has occurred despite little knowledge and without much consideration of what deer, elk, and other game animals actually see. It used to be that the good ‘ol army camo’ was good enough for everyone and every where. Now we have specialized winter, spring, fall, hardwoods, sagebrush, aspen, dark timber, and everything in between camo—we have gone ‘camo crazy’. I guess we hunters are just suckers for camo, I know I tell my wife all the time that it’s my favorite color and like most of you I feel comfortable wearing it to church or out in the field. My brothers and I still have a running joke about camo and every time we get all decked out we always make the comment that ‘I can’t see you’ or we ask ‘can you see me now’? Really though what it comes down too is how well we break up our Homo erectus form not if we look like the closest bush or tree out there in the woods. I wonder if we really think about this or just how good we think we look in the mirror, to our hunting buddies, or to those of us that are really lucky to our wives. Too understand what it means to break up the human form, I think we first must understand how and what an ungulate sees.

To understand how and what deer see, I think it is critical that we all have a general understanding of what makes up their eyes. Millions of years of evolution has driven and selected for the best eye for what a member of the cervid family needs. They need to see their world good enough to survive. This means, they need to be able to distinguish and see other deer, predators, vegetation, and escape cover. Cervids have what we call binocular vision. Their eyes are on the side of their head and can detect movement everywhere but directly behind them, unless they turn their head then they can see a complete 360 degree circle.

In members of the cervid family, the retina is located towards the back of the eye and consists of two types of receptor cells we now as rods and cones. Rod cells are used to see in the dark, the more rods a critter has the better they see at night or in the absence of light. Cone cells only function in light and there purpose is to see color vision. The rod to cone ratio is what helps us see color and most mammals see after it is dark. Members of the Cervid family have a higher concentration of rod cells which allows them to see very well even on the blackest nights, consequently, deer have better nighttime vision than we do but poorer daytime and color vision. Additionally, deer have a pupil that opens much wider than ours allowing them to gather more light in low light conditions. Deer also have a reflective layer near the back of the eye called a tapetum which causes their eyes to shine at night. The tapetum acts just like mirrors in your binoculars and reflects and bounces the light not absorbed back across the cone cells to be used again. What this really means is that deer get to use the same light twice where we only use it once. Unlike deer and most mammalian species, we and members of the avian community have more cones than rods and we see in living color and actually have three types of cones in our eyes. One type of cone cell is sensitive to short wavelength light and allows us to see blue, the other is receptive to middle wavelength and allows us to see green colors and the third type of cell is receptive to long wavelengths and allows us to see red colors.

A comprehensive study on deer vision was conducted on white-tailed deer at the University of Georgia in the early 90’s which finally laid to rest the ‘do deer see color’ debate. The results of their study confirmed that deer have two (rather than three as in humans) types of cones which would allow them to see two types of color (although not all of the shades of that particular color). The cone cells which deer lack is the red cone making them unable to see all shades of red (pink, orange, etc.) this doesn’t mean that these colors are invisible to deer just that they don’t see this wavelength of color. What

this really means is that deer are basically red-green color blind like many humans and can discriminate blue from red, but not green from red, or orange from red.

Now that we have a basic understanding on how and what deer see we need to draw some conclusions on what this means for us as hunters and our selection of camo Obviously we are up against animals that have evolved their natural senses to the extreme. It would almost make one ask if we need camo at all. It’s important to keep the findings of this study in perspective, just because deer can see some color doesn’t mean we can’t disappear in the woods. There is no question that scent and movement are far more important than the color of our camo. So the real question is how can we best break up our human form?

I will start with an example. A few years ago, I was sitting on a hillside with a hunter, we were hunting deer and elk on an early season hunt in Utah. We were watching a herd of elk vacate a draw and head over a small knoll out of our hunting area. I happened to glass with my binoculars further down the draw. I saw a hunter sitting on the hill side in the shade of a juniper tree. He was in full camo from head to toe and had a heavy beard, yet he stuck out like a sore thumb from a distance of 500 yards (give or take). However, even though the binoculars, it looked like he was wearing a light green/grey shirt and pant suit. I mentioned to my hunter that there was another hunter on the other side of the draw. He said where? I pointed in the general direction and without binoculars he said, “oh I see him right there, I wonder why he isn’t wearing camo”? I told him that he was but that it wasn’t a very good camo patter. I looked at him again and was shocked to see that there were two other hunters to the side of him. One was in the shade and the other was sitting behind a small bush. I hadn’t noticed either of them on the first look, so what was the difference? The biggest difference that I could see was the camo patter they were wearing. It was a less detailed more contrasting camo patter. The bush was a small bush and really only covered the hunter from the waist down. I later talked with the hunters so I knew what type of camo they were wearing. The first hunter that I could see was wearing a fairly new camo patter. It looked cool up close it was so detailed you could see the individual leaves and bushes the camo company was trying to patter. I have to admit I have this very camo as well, and it is cool. However, it isn’t a camo patter I wear while hunting, but remember camo is my favorite color.

Think about it, test it, take your camo out at 30 yards put it on a bush or tree blur your eyes a bit and look at it—what do you see? Do you see a single color—remember deer don’t really see color. Does it look like a regular t-shirt and Levis out there or does it blend in with the bush or tree it’s on? I’ve done it with many camo patters—what I see with the detailed camo patters out there is just a regular pair of pants and a shirt. The key to a good camo pattern (in my opinion) is to have some type of pattern that has good contrast between light and dark colors one that lacks the fine detail (sorry guys) that we seen in many of today’s camo patters. I think a patter that has 3-4 colors is plenty good and again contrast meaning black or darker colors against lighter colors is the key. These types of patters seem to blend in better in any type of woods or at least the woods I hunt and by blending in they help break up our human form and the deer are unable to detect movement as easy as compared with fine detailed camo where the detail is simply lost at distances over 30 yards. Remember scent and movement are the deers biggest assets keep the wind in your face and move stealthy through the woods with your ‘contrasty’ camo.

I have had a very similar experience with these new, “Hi-Def” cammos vs the old stand bye, high contrast camo patterns that may not be as popular. Whether I’m hunting canyons or fields or out of a tree stand or in the forest, the higher the contrast of the pattern, the better I am hidden. The info on the way deer see is a nice confirmation of what I have seen in the field as far as the way many cervids act when they “see” you.

So If the deer cannot see reds and oranges, why is it such a struggle to get humters to wear the international orange vests which make them readily identifiable to other hunters and help to prevent humting accidents? Wouldn’t is be just as easy to develope a high contrast camo in international orange that does not stand out to the deer but still enables hunters to be seen and recongnized by others BEFORE the shooting/hunting accident?

Good article….I wear ASAT most of the time, but also have a bunch of Predator that I will mix together. I know that Sitka has a bunch of money wrapped up in their research and the development of camo designs…..Just too spendy for me. Another great company on the rise is KUIU with their patterns and material…..However, they seem to be in competition with Sitka when it comes to price point. Most hunters fail to incorporate the research available on camo patterns and fall victim to the advertising from the 2 big companies that own the market share of sales. Break up the human outline, keep still and make sure the wind is in your face…..Maybe this is why Fred Bear was such a successful hunter? Those old large print wool shirts in red & black did their job…. 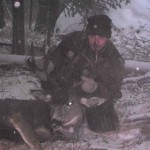