Terry Messmer wrote an article titled “It All Starts With The Fawns”.  In this article he discussed the importance of fawn production and survival being the key to success for your deer herds. In the last two paragraphs he discussed the importance of buck age structure within a given population and the role they play in the fitness of a population. He stated, “reduced numbers of mature breeding males in breeding populations could further disrupt mule deer reproduction if immature bucks are unable to breed (or might not know how to court and breed) available females”. Having a good number of mature bucks in the population is a very important part of mule deer biology. So my question is, does it really start with the fawns, or does it start with the mature bucks. I guess this is kind of like asking which came first the chicken or the egg. No doubt the health and fitness of the does is equally important as well. If does are not “fit”, they likely won”t even be breed. Terry goes on to say that the timing and strategies of our harvest and the increased recreational access during the fall and winter months could possibly be disrupting the biological mechanisms regulating mule deer reproduction. These factors may inadvertently be contributing to reported declines in deer abundance. How about we discuss the importance of age structure amongst the population of bucks and the role the older bucks play in mule deer population. Then we”ll briefly discuss how you and I fit into the mule deer management equation.

Does it all starts with the bucks?

Have you ever wondered what goes on in bachelor groups of bucks during the long summer months. While I do spend a fair amount of time watching them, I would love nothing more than to spend an entire summer or four day in day out watching one group of bucks interact, establish a dominance hierarchy among themselves, and learn new and undocumented behaviors; what a great summer job. A close friend and partner theorizes that during this time the younger bucks are learning form the older bucks how to be bucks. This might sound kind of silly but there is likely some truth to this theory. Much like the males in the human population there is a great deal of learning and maturing gleaned from the younger bucks observing older males. They learn what to eat, where to water, where to hide, how to act, how to treat the ladies and generally just how to be a buck. Without a doubt, these type of learned behaviors are crucial and key to the survival of the species. So just what is a mature buck. How do we know they are there?

Some biologist may classify and tell you a mature buck is a 2 year old buck. This is mainly because this buck is sexually mature. All this really means is that its testicles have dropped and it can produce viable sperm. However, a buck really doesn”t become “mature” until he”s somewhere around 5 years old. Not only are many physical characteristics of the buck fully developed but the buck has had time to grow and mature and knows how to be a buck. The question now is, are we losing some of these important learned behaviors because we don”t have the mature bucks we once had?

So what does all this mean?

The natural history of cervids dictates that the females will select and breed with the dominant mature male. Generally, this is determined by body and or antler size. This selection takes place during what we call “the rut”. The rut of mule deer, in most western states peaks around the third/fourth week in November. Mating with a mature buck should ensure a strong ‘fit’ offspring and builds a healthy population. At least that”s the theory. Unfortunately with the declines of deer in the west, there aren’t too many places where you find “mature” bucks doing the bulk of the breeding. Habitat fragmentation, highways and roads and urban sprawl have isolated and fragmented traditional winter ranges and breeding grounds. With these groups of does scattered hinder and yawn, it”s next to impossible for one or two mature bucks to breed 30 does let alone 100 or more. What is more typical in many of our herds is the two and three year old deer or even yearlings are doing the majority of the breeding. Are they capable of doing so? They are. The genes are still there, it can’t be bad for the population, right. Well, it might be and here’s why.

Could it all start with the Does?

A doe likely won’t breed with a scrawny pencil neck buck during her first estrus cycle. However, if she is still ‘fit’ she will come into estrus again 3-4 weeks later. Now, she may just decide that pencil neck is better than nothing if Goliath is still absent. This really isn”t helping our deer herds. The gestation period of a doe is 200 days give or take a week or so. Given that, lets do some math I know it hurts but it’s simple. Lets say doe “A” is bred on November 18th, given a 200 day gestation, the fawn should hit the ground right around the 30th of May. Doe “B” is bred on December 23rd (her second cycle) given the same gestation period, the fawn hits the ground on Independence day. Does anyone see what is happening here. Fawns born in May/June are likely to weigh more, be more “fit”, and better to withstand predation and make it through a bad winter than those born in July/August. These fawns go into the winter being less “fit”, weighing less, making them more susceptible to disease, predation, and extremes in weather. Which can lead to higher fawn mortality, less recruitment into the population and lower doe to fawn ratios. Ask yourself when the last time you saw a fawn with its spots still in late August/September. This really shouldn’t be happening if all the does were bred in late November early December, but I see it with more and more frequency.

Could we a part of the problem, does it start with us?

This is a tough question. It”s a biological, social, and economic issue. What are we to do. For starters, we just can’t continue to manage for quantity during these times of famine. Maximum sustained yield goes out the door with extremes in weather. One solution might be to manage for quality rather than quantity; another might be to simply reduce the number of tags sold and reduce harvest. Obviously this presents a few problems. Who is going to be the first to give up their tag for a year or three. I know in Utah it would be cut throat to give up a tag. Ask your state agencies how much money they can live without.

In summary, I don’t think we can continue to allow our immature bucks to do most of the breeding. We need those mature males in the population.We need “fit” healthy fawns to make it through the dry summers and the cold wet winters. We can”t be harvesting 70-80% of our yearling bucks during these harsh times and expect things to recover over night or from year to year. We must manage for an even age distribution of bucks in the population through restrictions and reductions. It’s important for us to realize this. We as hunters just can’t continue to kill anything that has antlers and expect our mule deer population to increase. I’m not saying we all need to be trophy hunters either. But just maybe we don”t have to kill a deer every year to be a real hunter.

The following tablet shows an estimated gestation date of “expecting does”This table isbased on the conception occurred given an average gestation period is 200 days.

About the author; Todd A. Black is a wildlife biologist and environmental consultant and part owner of CWMS. He enjoys hunting, photography, birding, and spending time with his family. Originally from Blanding, Todd currently lives in Hyrum Utah. 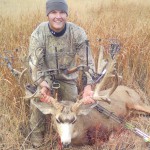