With the recent and increased sightings and harvest of White-tailed Deer in Utah, I thought it would be interesting to share a few facts regarding these two species and the challenges which will be faced by the mule deer.

Although there have been many unsubstantiated sightings of white-tailed deer in Utah for many years, they were first documented sighting occurred on the cache unit in 1996. Currently, the DWR has not developed a management plan for the white-tail specifically and the white-tail is recognized as just another deer species in Utah. Here are a few facts we (my ghost writer) would like to share. Finally, I would like to point out that white-tailed deer are not native to Utah, they are an invasive, aggressive species, which has the potential to displace mule deer throughout the west. We have seen what other non-native invasive species (raccoon, red fox, and noxious weeds) have done in this state to alter the habitat and have a significant impact on other native species of vegetation and wildlife. I would have to admit that I don’t think we will ever keep white-tailed deer out of Utah but I don’t think we should let them just run wild and let ‘nature’ take its course. Again, I think there needs to be some discussion/working group formed where we can discuss the issues, educate the public, and make management decisions which best represent the native wildlife of this state and the interest of the public. I don’t think white-tailed deer should be managed under the same umbrella that mule deer are managed. Mule deer are struggling on the cache unit, Utah and throughout the west. I fear the encroachment of the white-tailed deer in Utah will become a real threat to mule deer if we don’t act quickly and develop a aggressive management plan for the white-tailed deer.

we must eradicate them

I have heard of whitetail deer in the river bottoms at the mouth of Weber Co. in South Weber and Uintah. I think that there is enough source and data to say that the division needs to come up with a plan. Espeacially if it is proven that the whitetail population will take over our muledeer habitat. 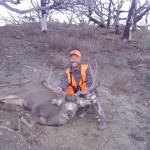