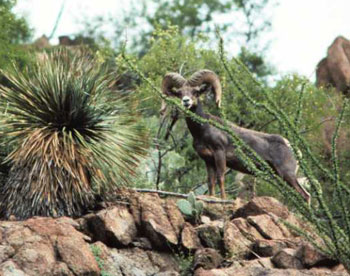 Bighorn is the wild sheep of North America. Its horns curve backward from the forehead, down, adn then forward. The largest horns on record were on the head of a bighorn ram killed in British Columbia. These horns measured 4 feet 3 inches along the front curve, and spread 31 inches apart.

Male bighorns stand from 3 feet 2 inches high at the shoulder to 3 1/2 feet high. Old rams wight between 200 and 300 pounds. The ewes are not as large. These wild sheep do not have wool as domestic sheep do. Instead they have a coat of hair similar to that of a deer. There are three kinds of bighorn, known as the Rocky Mountain sheep, the Dall Sheep, and the Stone sheep. The Rocky Mountain bighorns live on open slopes of the Rocky Mountains and Sierra Nevada from southeastern British Columbia southward to northern Mexico. In the Northern mountains, these sheep are dark grayish-brown. In the hot mountains of the desert country far to the south, they have coats of pale buff. All the Rocky Mountain sheep are creamy-white on the lower parts of their bodies, and have patches of the same color on their rumps. The Dall sheep live in much of Alaska and the western Yukon. These sheep are white. The Stone sheep are found from the south-central part of the Yukon to central British Columbia. Their color varies from dark brown to black. The Dall and the Stone sheep are more lightly built than the Rocky Mountain Sheep, and have slender horns with graceful curves.

Bighorns make their homes in the highest parts of the mountains, where human beings find it difficult to go. They live in bands numbering as many a 60 animals. Male Bighorns usually live in groups of 2 to 15 animals. Females and young live in separate groups, usually 15 to 30 animals. During the mating season, rams often engage in long, spectacular fights. In these battles, which may last for hours, two or more rams repeatedly charge at one another and fiercely crash their horns together. Typically, the male with the biggest horns wins.

The lambs are born in the spring. The ews usually bear one lamb at a time, but sometimes have twins. In the Rocky Mountain National Park in Colorado, the ewes can sometimes be seen urging their lambs to jump from one rock to another. Lambs two or three weeks old can go wherever their mothers go. Bighorns jump and climb easily in dangerous places. They escape wolves, coyotes, and mountain lions by racing for heights far above them. Bighorns are equally sure-footed when they plunge at great speed down steep slopes hundreds of feet high.

Bighorns feed on grasses and low shrubs. They also eat the tender twigs of bushes.

Many bighorn sheep have been killed by big game hunters, who prize the heads as trophies because of their great horns. Stock-grazing and diseases have also cut down the numbers of these wild sheep in the United States and southwestern Canada. Mountain lions and eagles prep on them. However, governmental agencies and other groups are trying to preserve the bighorn.