Caribou is the French-Canadian name for a large deer of North America that is closely related to the reindeer. Caribou have broad hoofs to support them in deep snow and spongy tundra. They have broad antlers, and the male’s antlers grow much larger than the female’s. The female caribou is the only American female deer besides the female reindeer that has antlers. 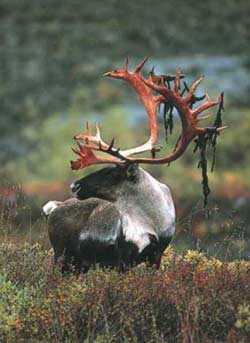 A bull (male) caribou weighs from 250 to 700 pounds, stands 4 to 5 feet tall, and measures 6 to 8 feet long. A cow (female) is smaller than a bull. Cows give birth to one calf in late spring. There are two main types of caribou-barren ground and woodland.

Barren-ground caribou spend the summer in the Arctic tundra and the winter in the evergreen forests south of the tundra. They may be found from western Alaska to western Greenland. In the western part of their range, they live in large herds. roaming caribou cover the land for days at a time. They do not overgraze their range because they keep moving from place to place. In summer, they eat mostly grass and leaves of various shrubs. In winter, they live mostly on lichens.

Woodland caribou are slightly larger and darker than barren-ground caribou. They are found in forested regions from Newfoundland to the Northwest Territories and down through British Columbia, northern Idaho, and northeastern Washington.

Some Northern Indians and Eskimos eat caribou meat and make soup form the animal’s marrow. They make clothing and tents from its hide. They use its bone for needles and knives, its tendons for thread, and its horns for fishhooks, spears and spoons. The number of caribou has declined from about 2 million in the early 1900’s to about 1 million today. 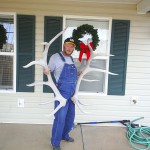