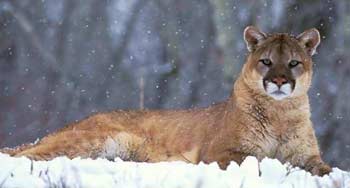 Mountain Lions live the Western United States and Western Canada. An adult mountain lion may be either a gray color or a reddish or yellowish color called tawny. Its hairs are fawn-gray tipped with reddish brown or grayish. This animal has no spots. The throat, the inside of the legs, and the belly are white, and the tip of the tail is black. A full grown animal may be 4 to 5 feet long or even more, not counting the heavy tail, which is 2 to 3 feet long. The body is slender, and the legs are long. The head is round and rather small.

Mountain lions have from one to five cubs at a time, generally two years apart. The average number is three. The cubs weigh about 1 pound at birth. They are lighter brown than their parents. The cubs have large brownish-black spots on the body and dark rings on the short tail. Adults care for their young until they are able to survive alone.

Young lions need about two years to develop enough skill in hunting to find their own food. They may live to be 10 to 20 years old. The cry of a lion is wild and terrifying. It sounds like a woman screaming in pain. The also has a soft whistle call. 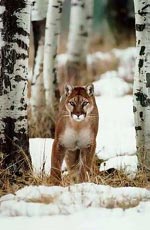 It will travel many miles after game in a single night. Its chief prey is deer, with elk the second choice. Occasionally it kills a bighorn. In case of need it will feed on small mammals–even skunks and porcupines. The mountain lion keeps under cover while stalking its prey. Then suddenly the lion leaps out upon the animal, breaking the animal’s neck or dragging it down to the ground.

Mountain lions are not usually dangerous to man. They are actually timid toward man, and are less likely humans than other big cats. 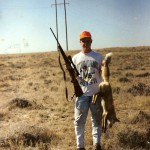