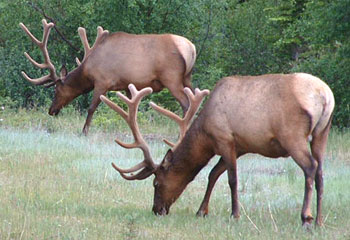 In the deer family, only moose exceed the size of elk. Originally inhabitants of the Plains, elk were hunted to dangerously low levels to feed miners, settlers, and railroad crews. Once numbering 10,000,000, they were reduced 99% at the start of this century! The State  government has protected elk since 1927. About 25 elk were brought to Idaho Springs by train from Wyoming in 1921. They thrived, spending summers in the High Country and migrating to the warmer foothills when forced down by heavy snows. These are now part of 200,000 living in Colorado which boasts the largest elk population of any state or province.

Bulls weigh 700 to 900 pounds, cows a few hundred pounds less. They stand 5 feet high at the shoulder. Often you can smell them before you see them as they have a strong musky odor. Shawnee Indians called the elk Wapiti, meaning white deer, a reference to the sun-bleached spring coat. Elk have a pale yellowish rump, short tail and dark brown legs, belly and head. Their sides are gray-brown in winter and reddish-brown is summer after shedding in June. Males have a shaggy neck mane. Normally wary of man, elk have a good sense of sight, hearing and smell. Their maximum life expectancy is about 15 years. The most polygamous members of the deer family, healthy bulls can have harems of as many as 26 cows. In late August and September their interest in mating is signaled for about four weeks when they bugle and begin forming harems. This unique and lovely sound is meant to warn other bulls. Dominance is established through antler-locking confrontation, visibly more symbolic than dangerous. Cows can breed at 18 months and produce a single 35 pound white-spotted sorrel calf in June after 8 1/2 months of  gestation. Females do all the rearing for nearly a year. Mother and calf call to each other with a squealing sound; sometimes there is a sort of babel as groups of cows and calves assemble. A sharp, loud bark seems to indicate curiosity or alarm. Bull elk have huge spreading antlers. By 15 months the first spike antlers are 15″ long; each subsequent set will be longer, heavier and more tined. Largest antlers are found on elk in the prime of their life, the number of points and size of beams are influenced by nutrition, genetics and age. The splendor of antlers determines degree of royalty: six tines on each beam = a Royal seven points per side = Imperial and rare elk with eight or more tines per beam are Monarch. Antler weight ranges from about six pounds to more than 22 pounds for racks of mature animals. Antlers grow in early spring and are shed during the following winter.

In summer the elk diet is mainly grass and forbs; in other seasons half the diet is browsed from shrubs and trees, particularly aspen. In summer small groups herd together. They bed down on open hillsides or in heavy timber during storms and look for north slope forest cover on hot days.