General Info
The Moose is the largest member of the deer family. It is larger than any deer that lived in pst ages. The largest kind of moose live in Alaska. Sometimes they grow 7 1/2 feet high at the shoulder and weigh from 1,500 to 1,800 pounds.

Moose live in northern regions throughout the world. In North America, they live from Maine to Alaska and south through the Rocky Mountains to Wyoming. 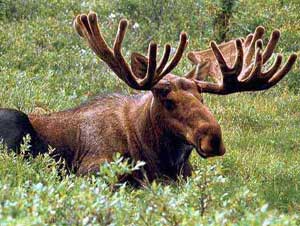 The Moose has long legs, and high shoulders that look like a hump. The upper part of the moose’s muzzle hangs 3 or 4 inches over its chin. The bell, an unusual growth of skin covered with hair, hangs underneath its throat. Its coat is brownish black on the upper parts. This dark color fades to a grayish or grayish brown on the belly and lower parts of the legs.

The bull moose has heavy, flattened antlers (horns). The antlers on an unusually large moose spread 6 feet or more. Each antler has 6 to 12 short points which stick out like fingers from the palm of a huge hand. A moose sheds its antlers every year and grows a new pair. The antlers are full-grown by late August. The bull then strips off the dead skin, called “velvet,” and polishes his great weapons against trees.

The mating season of the moose lasts from four to eight weeks in the fall. The bull wanders about at this time searching and calling for cows. The cows also call to bulls. A bull usually follows every sound to see if it was made by a cow or a rival bull. Moose hunters often try to lure the game within shooting range. They imitate the hoarse grunts of the bull or the love call of a cow by using a horn or by calling through cupped hands.

Baby moose are born in late May or June. The mother carries them inside her body for about seven and one-half months before they are born. A cow may have one calf, twins, or rarely triplets. The calf is reddish-brown and has long legs. When the calf is about 10 day old, it can travel about with its mother. At this time, the bull moose stays by himself or with other males.

Moose like best to live in forest land that has willow swamps and lakes in it. There the animals spend the summer, and the cows care for their young. Moose eat woody plant, especially twigs of willows and such shrubs as hazel, dogwood, and mountain maple. In addition, moose eat plants that grow under the surface of shallow water. They wade into streams and ponds and put their heads underwater to get a mouthful of plants. They usually raise their heads to watch for enemies while they chew.

Moose usually live alone and do not form herds as do elk and caribou. However, sometimes a group of three for four moose will stay in one spot if the food there is plentiful.

The chief enemies of moose are bears and wolves. A wolf pack or a bear will kill and eat a calf if the calf can be separated from its mother. Once a moose is full grown, even a wolf pack cannot kill it unless it is old or weak. A moose does not begging to suffer from old age until it is about 12 years of age or more.

Although moose and white-tailed deer both live in forests and eat similar food, the two animals are usually not found together in great numbers. Deer carry a disease that rarely is fatal to them but often kills moose. This disease is caused by a tiny worm. The worm lives harmlessly on the surface of a deer’s brain or spinal cord. In a moose, however, the worm burrows into the central nervous system and causes paralysis and, eventually death. 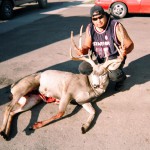