Here is a few pictures of the buck I shot. This is by far the best deer I have shot! It is a clear 8 x 5, but there are acctually 3 points on the left side that you can hang a ring off of (for boone and crockett scoring). So for B & C scoring it would be a 8 x 8. My taxidermist measured it and said it scored 205 with about 14 points in deductions (two sticker tines and one unmatched split tine on the back left fork).

I have hunted the same area in NW South Dakota for over a dozen years. It is public land and has always been productive.

My son Mack and I started out from the truck right at daylight and worked our way back to where we were going to concentrate our hunting day. We stopped about a mile from the truck to over look a doe and fawn in a canyon. We sat down and was watching them when I saw a big 5 x 5 that was trotting away from us around 300 yards. I would have shot him if he would have stopped, but he didn’t. Lucky for me! We went ahead and worked further back, maybe about another 1/2 mile, to a the biggest hill in our area where I see good bucks crossing some times. We were going to sit there about 15 minutes, so Mack could rest (Mack was carrying the pack frames with the equipment, saws, game bags, camera, etc.) We were still about a mile away from where I wanted to hunt. I started to get up to get moving, when I saw a couple of deer about a 1/2 a mile ahead of us, so I sat back down and told Mack we would wait to see if they would move towards us. We sat for another ten minutes when I told Mack to hold onto my rifle because my suspenders on my left side were screwed up and was digging into my side. I leaned over and started messing with my suspenders. I was looking down trying to get my crap in order when I caught movement, only 75 yards away. I looked up and saw the buck. All I could comprehend was, HOLY COW, what a set of horns. I knew it was a shooter buck, but really had no idea how big it acctually was. I whispered to Mack, “Big Buck, Big Buck, don’t move, do you see it?” Mack said, “Wow”!, I said, ” Slide me my gun”. Mack got me the gun and I slowly brought it up, and got it centered on the buck. It was walking from my left to my right. It never saw us, even though from the pictures you can see there wasn’t a bit of cover for over a mile. I squeezed the trigger and it jumped forward. I heard the solid thump of the bullet hit and knew I had a solid it. It ran below the hill into a gully where I couldn’t see it. I waited to see if it came back out so I could slide another shot into it, but it never did.

I told Mack to grab the pack frames and follow me. I went down the hill and found the buck folded up about 50 yards from where I hit it. When I got down to the deer and I just about died. I knew it was a shooter buck when I saw it, but I had no idea. Mack was till about 80 yards away when I yelled at him that he wasn’t going to believe the size of this monster. We took pictures and then started to quarter him out. We took the head with cape and front quarters and back straps to the truck first. Then we went back for the rear quarters. I shot the deer at 0715 and got the last of the deer to the truck at 1500.

When I got to the taxidermist the next afternoon, he was busy taking to another couple hunters about a small 5 x 5 they wanted mounted. When I walked in, he stopped, looked at my deer and said, “HOLY Crap, that is what I have been waiting for!, look at those incredible forks” He asked if I had measured it yet. I told him I had no idea how to measure a deer, so he asked if I wanted him to measure it. So he got his tape and went to work. The deers left side measures 85 points and the right side measures 96 points. The forks are 13″ and 14″ deep respectively. He said it has been a number of years since he has seen such deep forks. Over all it measures 205″ with about 14″ of deductions.

I love the barren rolling hills in the background of that pic. That would be a great experience hunting muleys in an area like that. Congrats to you and your son this year! Sounds like you two have put in the time in that unit and earned that buck, that’s awesome it’s public land that you hunt every year. 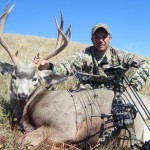