My oldest son Donnie and I had been hunting pretty hard for four days.  We started the short 5 day season hunting separately.  He went to a place he thought would be un-crowded, but might have a big buck hiding out.  I went to a spot that I thought would be crowded with deer.  He saw the big buck that got away, and I saw nothing but hunters.  We tried all of the “secret” spots we could think of and saw a few small bucks that we gladly passed on – hoping for something bigger than average.  The night of the fourth day we couldn’t decide where to go for our final attempt.  At this point, Donnie told me that he would settle for any buck we could find for his first trophy.  He’s got my recipe for jerky and he wanted to try out his new smoker.  I thought there should be a pretty good chance of finding a small buck almost anywhere, so we went to bed without a plan.

The last morning of the season we got up and headed out at 5:30 am.  We decided to drive up to a spot that I thought would be great for glassing with my 20x80mm binoculars.  When we arrived at the place I wanted to park, I realized that we were too early.  It was colder and the wind was a little gusty, so we decided to wait until legal shooting light before leaving the warmth of my jeep.  When the time came, we reluctantly got out, gathered up our packs and walked the quarter mile to the point we had chosen.  As soon as I got set up, I started spotting small groups of Does, but no Bucks were with them.  I was beginning to think the Bucks had all been killed out of this area.  That’s when I realized that there didn’t seem to be any hunters in the area this morning, which was quite odd.  I had spotted a couple of orange spots down in the valley about a mile and a half away, and I had seen a few ATV’s go up the road that was about a half mile east, but there really weren’t any hunters near us.  We had the whole place to ourselves.

I found myself looking over the same Does over and over again, when I spotted what looked like a good Buck about a thousand yards away – right out in the open.  I fine-focused the binoculars as the Buck was broadside, then told Donnie, “he’s a four pointer”.  I looked again, and the Buck had turned to look in our direction.  “AND HE’S GOT CHEATERS”!!!  Donnie wanted to take a look, so I moved aside so he could see him.  Donnie started shaking, but I’m sure it was due to the cold setting in……not buck fever.  As Donnie pulled away from the binoculars, he looked at the area the buck was in and asked me how far away I thought he was.  I told him that I thought he was better than a thousand yards.  I had accidently left my range finder at home that morning, but that distance was out of the question, even for my long range rifle.  I decided we should just sit there and wait to see what the buck decided to do next.

The buck was acting very cautious and seemed to be moving very deliberately, listening and looking before moving again.  When he moved, it was very slowly, almost like he was stalking something.  He kept his head low, and would stop by dead Cedar trees for cover.  This area had burned a couple of years ago, so almost all of the cedar trees were dead.  The sun finally peeked over the mountain, and the buck decided to bed down between two dead trees facing away from us.  When he lay down, all I could see of him were his antlers, and they really blended in well with those dead tree branches.  I told Donnie that I wasn’t any good at sneaking up on deer because I am too fat and clumsy, but then on the other side of things, he didn’t really have any experience.  He assured me that he was plenty sneaky when he wanted to be, so with these things in mind, and adding in that he had never harvested a buck, the decision was easily made that Donnie would be the one to try to sneak within range.

He would be using my Remington stainless Sendero with a fluted 26” heavy barrel.  It was topped with a Leupold 6.5-20x50mm Long Range scope.  It is chambered in 300 Weatherby, and I custom load my own ammunition using Remington nickel plated cases, CCI 250 primers, 81 grains of IMR 7828 SSC powder, and topped with a 200 grain Nosler Accubond bullet going 3050 fps.  I know…this sounds like too much for Mule Deer, but I wanted a good all-around long range load for both Deer and Elk.

We discussed that although the scope has a bullet drop compensating dial that goes out to 700+ yards, the rifle is currently sighted in for 300 yards, and that at 100 yards the bullet would hit around 3 inches high, so if he got that close he would need to aim at the bottom third of his chest to hit center.  If he aimed center, he would probably hit the spine and drop him, but off hand, that’s a pretty small target.

Donnie grabbed my rifle and headed down the hill to the west about 50 yards, then he turned north and skirted the edge of some of the few live trees remaining.  Once he felt he was low enough that the buck wouldn’t be able to see him anymore, he didn’t worry about staying hidden, but he tried to walk quickly but quietly.  I was a little nervous that he was going too fast, but the buck didn’t show any signs of hearing anything.  He came to a barbed wire fence which separated two range allotments, and found a place where he could roll under the bottom wire without making any noise.  After the long trek, he finally arrived at the small ridge that we had agreed would be a good place to sit and wait for the buck to stand up.  Even though I could see both Donnie and the buck in my binoculars, he couldn’t see the buck.  He was only about 150 yards away, but just over the crest of the hill.  Donnie looked over at me and I tried to signal to him that the buck was still bedded in the same spot.  That’s when I realized that Donnie had left his binoculars where we were sitting, and he couldn’t see my signals.  He knew he was at the right spot and figured he should just sit and wait, which was the right thing to do.

About a half hour had passed when the buck decided he’d had enough of the sun shining on him.  He stood up and stretched, then turned toward the south.  I whistled to get Donnie’s attention.  He had to stand up to see the buck, but when he did, he could only see the top few inches of the buck’s body over the hill, so all he could do was follow the buck in the scope as he walked along the hill side looking for a good shady spot.  I was screaming inside “SHOOT, SHOOT”!!!  It seemed like half of forever before I heard the first shot.  The buck just stopped and looked around – like he was thinking “what was that”?  Evidently the first shot had been deflected by some unseen branches.  The buck took a couple more steps and then the second shot was heard.  This time I actually saw the buck jump a little, but I couldn’t see where he had been hit.  The buck turned and slow trotted back to his original bed, then slowed to a stiff legged walk.  He looked a little wobbly, but he kept walking.  As he came out into the bright sunlight, the third shot rang out.  I saw the hit clearly, right behind the shoulder.  The bucks’ left front leg instantly went stiff and he stumbled away a few yards, stopped, staggered, and then fell out of sight to his left.  He was over the crest of the hill when he fell, so Donnie didn’t know the buck was down.  I let out a whoop inside, then quickly gathered up all of our gear and started walking over.  While I was walking, I couldn’t help but to think to myself how amazing it was that this whole thing had worked out so perfectly.  We had certainly been blessed today.

I must have been holding my breath, because I was suddenly gasping for air.  I had to slow down and breathe a little.  The excitement was just too much.  When I finally got to where Donnie had been when he shot, I gathered up my nickel plated brass (he was too excited to remember) then headed toward the red cedar tree that was my marker for where the buck had dropped.  When I got there, Donnie came over the hill with a discouraged look on his face.  I asked him if he had found the buck yet, and he said “no”.  I assured him that I saw him go down and we wouldn’t have any trouble finding him.  We walked about 20 yards when Donnie said “THERE HE IS”, and started whooping it up.  We were so excided to see that giant rack sticking up.

Most of the time for me, when I walk up to a “big” buck I just shot, he gets smaller, and smaller, the closer I get.  This one seemed to swell up before our eyes.  After a quick count of the points – 7 on one side, and 10 on the other, Donnie took a few photos with his cell phone and sent them out to all of his contacts.  Within seconds his phone was ringing.  It rang within seconds each time he hung up.  Isn’t technology great?  Some of his friends didn’t believe him when he told them where this buck was.  How could he live through so many years of crowded hunting conditions without being shot?  I’ve heard people say “big bucks don’t get big by being stupid”.  Well, my theory is: bucks get big by being lucky – lucky to live in an area where they don’t get shot.  In this buck’s case, he had been extremely lucky his whole life – until today.  His luck just ran out.

We haven’t had a chance to score him, but he’s 34” wide at the tips of the cheaters.  He definitely scores a lot higher than anything I’ve had the privilege of shooting over the years, and a high score just adds to the bragging rights.  Donnie fully understands what a rare and special thing it is to take a buck like this one, and he knows that it is the buck of many lifetimes.  He’s hooked, and he looks forward to many years of trying to top it.  I feel honored to have been a part of his hunt.  Next year, it’s my turn.  Wish me luck – I’ll need it. wow!! super nice deer! what state did you get it in?

This picture looks like it was taken in St. George 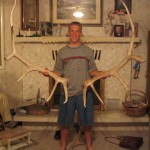