I had a heck of a time on my first muzzy hunt a few weeks ago! I had always wanted to try hunting with a muzzleloader so I put in for a tag and drew out. I didn’t care to try to deal with the crowds of the rifle hunt again so I figured this would be a better route and it was a lot more enjoyable. Still a little busier than expected, but no where near as crowded as the rifle hunt.I decided to buy a CVA Optima for pretty cheap on midwayusa.com and slapped a Traditions 1x scope on it and found that it loves a 300 Grn SST over 2 Triple 7 pellets. Anyways, on to my hunt:I had access to some land in the Cache unit and that is always full of loads of deer. I scouted around a few times and found a few nice bucks roaming around.
Opening Morning:
After a long, sleepless night, it was finally game time. My buddy and I left the house at 5:30 to make sure we’d be in our spot well before first light. As soon as it was light enough to shoot, I heard footsteps moving to my right. I slowly grabbed my muzzleloader as I leaned over to watch 8 deer moving through the brush at 60 yards! I had plenty of time to confirm that they were only doe and fawns…. Tagging out that early would’ve been a little boring! haha. Things began to pick up a little more as the deer began moving from the creek bottoms up to feed and bed. We made a move to cut the distance a bit and got to a nice point to sit and glass. As I watched a group of deer roughly 200 yards from me, a  group of bucks came running in. THey were all very nice deer and I moved a little too quick- one spotted me trying to lay down for a prone shot. Bad move, and they were gone! I was sick to my stomach.To make a long story shorter, over the course of the first 4 days I had a few shot opportunities that I ended up blowing. I missed a nice 3 point and a fork horn on the same day, so I headed out to the range to double check my zero. 3 shots later at 100 yards confirmed what I thought was wrong all along: I was the problem!! 😳 Apparently I still suffer from buck fever. DAY 5
Fast forward to Monday morning. I figured this morning would be slow with it being the start of a new week. I decided to skip class and try another morning hunt. I got up to a good vantage point before sunrise so I could see anything that was moving in. It took a while, but I finally spotted deer moving up a finger towards me quite a ways off. As they dropped below sight, I made a move to close the distance. After a while, I looked ahead of me and saw a deer standing on a trail right ahead of me! A quick check confirmed that it had antlers! I ranged him at 94 yards and figured that I only had one more morning of hunting so I better take the chance. I took my time and steadied on him and heard a WHAP when the gun fired. I saw him bound away and out of sight, but I was sure I had hit him.
I walked to where he stood at the shot and saw this!
After a short tracking job (Maybe 50 yards) , I looked ahead to find him laying dead on the ground.

The buck was quartering a bit and the bullet entered in his right shoulder and exited out of behind his last rib. I know he’s a young buck, but man I am happy to fill the freezer this year. I thought muzzy hunting would be a lot easier than it turned out to be, but I feel like I really improved my hunting skills. He is going to taste great and I can’t wait for next year to roll around! I think I may be hooked to hunting with a muzzleloader! 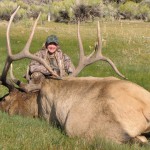